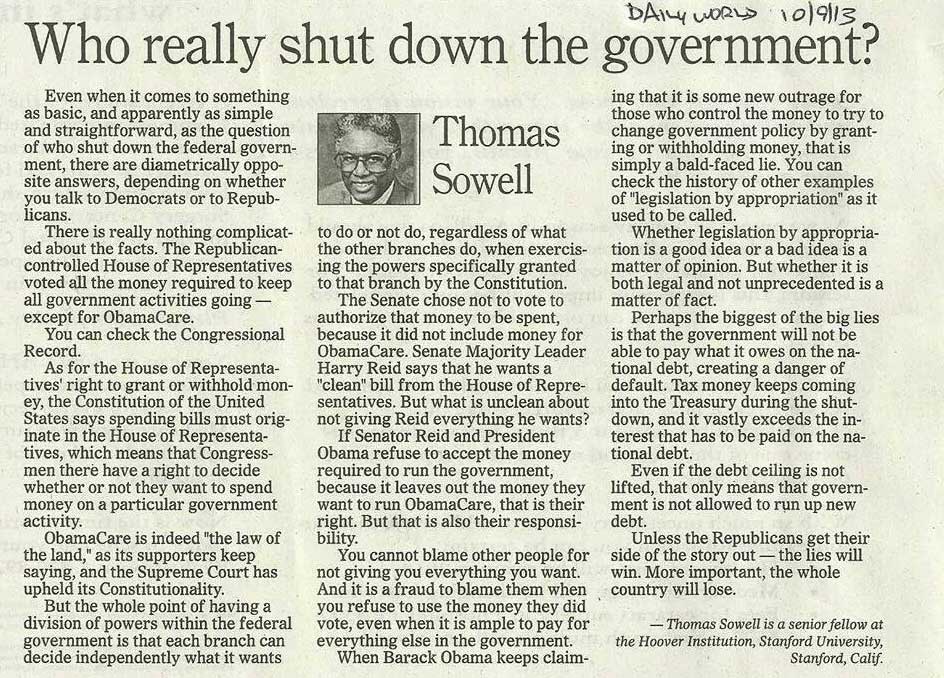 Yes, if the media’s obsession with the congressional blame game is what counts. However, delegating blame is not a solution to the fundamental problems of equity in health care, a functioning government, and the sensible choice of operating within a budget vs. arbitrary cuts. Sequestration, shutdown, and threatened default are very much hardball politics, and it is no surprise that the opposing party responds in kind, especially as the end game becomes increasingly clear; that the right wing will be left holding the short end of the political stick.

The assertion that we can pay our debts without increasing the debt ceiling is mathematically feasible, but our interest obligations equal about 40% of the budget’s discretionary spending, or alternatively it is equivalent to approximately 1/3 of our Social Security obligations. The author fails to suggest which of these, and which categories within, he proposes to cut in order to continue servicing our interest obligations on the national debt. Sounds awfully like the economics analog to the neocon chicken hawks. Perhaps he’d have the cojones to put our money where his mouth is.

It is ironic that the author is on the payroll of the Hoover Institute, founded by the President who’s similar austerity policies greatly amplified the effects of the Great Depression. One can only hope that his next editorial elaborates on best practices in constructing Hoovervilles.

It’s not hyperbole to suggest that Hoovervilles would be on the horizon if we were to either cut Social Security by 1/3 or slash discretionary spending by 40%. How much does Sowell propose to cut from spending to continue paying interest? Find $245 billion a year that the Hooverites feel comfortable cutting and that won’t have dreadful consequences for millions of Americans. Hard choices, eh?…